"Some call them pirates, some call them heroes, but none dare call them cowards! In all of nautical legend, never before have such strange and courageous figures come together to unravel the incredible mysteries lurking in the inky ocean depths. If the heading be danger, make way for the DEEP DIVE DAREDEVILS!"

There's a contradiction at the heart of Deep Dive Daredevils.  It's a tribute to pulp adventure comics, a genre named after the cheap pulp paper it was printed on, yet it's published online and is unavailable in print.  Deep Dive Daredevils is digital pulp, a new kind of pulp that has transcended the limitations of paper publication and made the jump to purely online distribution while celebrating the core elements of the genre.  Deep Dive Daredevils is a strange concoction of time travel, cyborg submarine captains, and shamanistic magic, and it's released on the web, one page at a time, on a weekly basis. Writers Matt Heistand, Dan Fifield, and Evin Dempsey, who make up the writers collective known as The ThreeOneFive, begin Deep Dive Daredevils with a pirate ship sailing the Arctic Ocean in 1851.  I was immediately struck by Danilo Guida's art style on this first page.  Guida portrays the Aurora Borealis beautifully with modern coloring techniques, but his penciling and inking has a rough, old school look to it.  The page itself has been modified to look aged and faded, as if Deep Dive Daredevils is an artifact salvaged from the pulp era of comics that has been scanned and uploaded to the internet.

(UPDATE:  Danilo Guida contacted me to let me know that the aging of the pages was done by Fonografiks, the letterer of Deep Dive Daredevils.)

The Aurora Borealis mysteriously strikes at the pirate ship and sinks it, and we then cut to 1937.  The Custer, a submarine, is traversing the very same waters that the pirate ship sank below in 1851.  Joe, a young boy with an eyepatch, and Cup, his three legged dog who also wears an eye patch, spot a man out on the glaciers.  Joe rescues the man and brings him aboard The Custer where Dr. Eugene McCarver cares for him.  The man is Captain Ulysses Armstrong, and he doesn't seem to have any idea how he got here.

The strength of Deep Dive Daredevil's narrative lies in its escalation of shocking reveals that make you reevaluate what's happening in the comic.  This is a smart way of structuring a comic that's published one page per week because the frequent, mind blowing reveals keep you on the edge of your seat for the next week's installment.  So, at this point, I'm just going to go ahead and suggest that you read the comic before continuing because we're about to enter pretty spoilery waters. 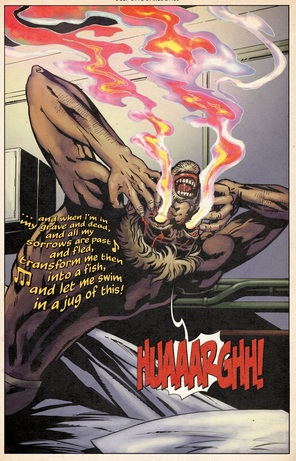 The plot explodes into madness from this starting point as the time displaced Armstrong is transformed by the odd Aurora Borealis energy (which may in fact not be related to the Aurora Borealis at all), and he begins to mutate into a sperm whale.  Guida's full page spread of Armstrong clawing at his face as beautifully colored energy streams into his eye sockets is stunning.  Armstrong is rapidly expanding into a massive sperm whale inside of the confined space of the submarine while Joe, McCarver, and the other crew members struggle to get him to the shuttle bay.  The mysterious Captain of The Custer is barking orders to them throughout this sequence over the intercoms in intervals of "bztk" noises. 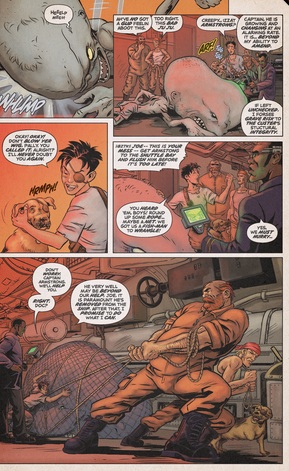 This scene is built on the pretty solid foundation of the visual weirdness of a man morphing into a whale, but the ThreeOneFive hivemind make it something more than mere spectacle.  The rapidly expanding Armstrong gives the scene a ticking clock, a narrative deadline that forces the crew of The Custer to eject the creature before it destroys their vessel and them along with it.  The ThreeOneFive also make the crew humorous and relatable characters rather than just chess pieces to move around Whale Armstrong (Whalestrong?), and they tell a dirty joke that flies over the head of the young, eyepatched Joe.  Joe rushes into danger to fix the jammed bay doors and is sucked into the ocean along with Whalestrong, and this elevates the stakes of the narrative while simultaneously resolving the problem of the expanding whale.

While Cup swims after his master Joe, McCarver runs to the bridge where the as of yet unseen Captain has been incapacitated by the traumatic damage to the ship.  The ThreeOneFive structure this scene in a brilliant way; this week's page ends with Joe lost under the Arctic waves and McCarver dramatically facing the door to the bridge where, "Captain Custer's terrible secret waits beyond this door".  They even make their intentions to leave you desperate for the next week's page explicit in the caption, "Hold thy breath, constant reader". 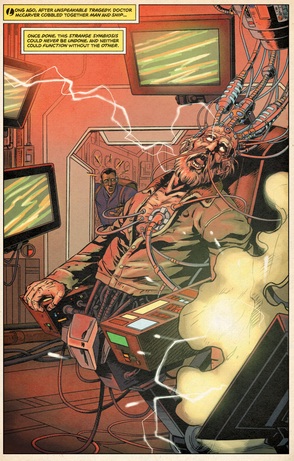 Of course, beyond that door, the comic's next mind blowing and game changing reveal awaits.  A full page spread shows us that the captain of this vessel is a legless cyborg plugged into the systems of the submarine! Guida's art here is just amazing, and the ThreeOneFive's captions summarize the captain's condition in a concise and compelling way, "Long ago, after unspeakable tragedy, Doctor McCarver cobbled together  man and ship...once done, this strange symbiosis could never be undone, and neither could function without the other."  Once you get past the surface level of the sci-fi image assaulting your senses, you realize that the ThreeOneFive have crafted a mythic character here.  Captain Custer is one with his ship, and "neither could function without the other".  This is a literalization of the mythic idea of a captain's bond with his ship, and it's really quite a poetic concept in addition to being a nice heaping of sci-fi awesomeness. 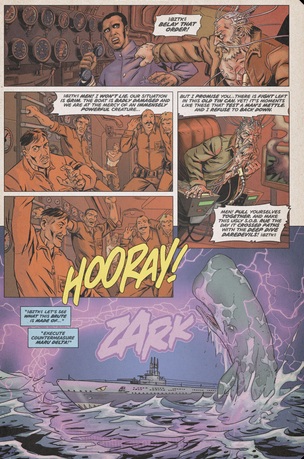 McCarver manages to "reboot" Custer just in time for the cyborg captain to belay his order to abandon ship.  The ThreeOneFive deliver on the promise of a cyborg submarine captain by writing him full of fire and passion and humanity despite his mostly mechanical body, and he rallys the crew with a fiery speech.  Meanwhile, Whalestrong is assaulting the ship as it crackles with unearthly, purple lightning.  Guida shines again here with this illustration, and the color of the purple, mystical energy really pops in contrast with the faded colors that he uses to give the rest of the page an artificially aged look.

This is only 21 pages into the 32 page comic...there's still deals with Shaman representatives of local Sea Goddesses, vengeful animal spirits, time travelling, and mystical trials to come in that eleven page gap.  Deep Dive Daredevils is a comic that is jam packed with sci-fi craziness.  It's a comic that embraces its weekly format by giving the reader enough thrills, excitement, and mind bending reveals to keep them coming back every seven days for the latest page.

It's also an homage to a genre of pulp adventures from a bygone era, but Deep Dive Daredevils is published on the screen rather than the cheap, poor quality paper of the original pulps.  It retains the familiar aspects of pulp stories while it capitalizes on the advanced coloring and production techniques available to modern artists.  Still, despite it's online nature, the beauty of the comic is that it's created to appear aged in such a way that the reader is given a pulp experience, as if they've stumbled upon this forgotten gem in a dusty attic.  Deep Dive Daredevils is digital pulp, and I'm looking forward to where the ThreeOneFive steer this crazy ride of a comic in the future.
Posted by Seth Jacob at 12:36 PM