How did you come up with the concept of Deep Dive Daredevils?

Well, we (The ThreeOneFive) were asked to pitch a story for an iPad anthology - something similar to the format of Marvel Comics Presents. The only instructions were that they wanted something akin to Heavy Metal, but appropriate for all-ages. So Evin, Dan and I percolated a while and we decided that we wanted to take a shot at combining a Star Trek-esque sci-fi story with some Goonies zaniness, and the germ of the Deep Dive Daredevils concept was born. 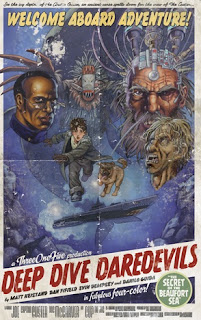 At the same time, we thought it would be interesting to utilize Golden Age/pulp stylings in a story that would be consumed digitally. Old school meets new. Eventually, we decided that the adventures would take place underwater, in a submarine, and once the idea of a Captain who was one with the boat was floated (heh) it all started to come together.

We pitched Deep Dive Daredevils to the anthology and it was accepted. Unfortunately, the anthology was scrapped altogether not too long after, but we were having so much fun working on the Daredevils that we decided to publish it online ourselves…and here we are!

How did you find Danilo Guida to illustrate the comic (beautifully, I might add)?

We got really, REALLY lucky.

We placed a want ad, looking for an artist, at Digital Webbing and all the other usual places and Danilo responded. We all really liked his previous samples and thought he would be a perfect fit for the book, so we offered him the job.

From the start Danilo was super-professional and enthusiastic about the project. And best of all, he just got it! Every character that you see in the book, Danilo nailed their design on the FIRST try. We never had to ask for changes - we were on the same page from the start - and in many instances he added elements that made the characters better. Danilo is the reason the Captain doesn’t have legs - he showed us his version of the Captain and we were floored! 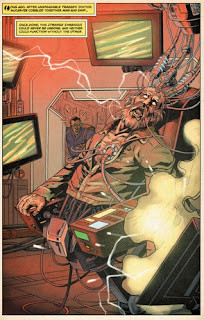 Over the time we’ve been working on the Daredevils we’ve become friends, and it is unbelievably freeing to know that anything you write will be executed so skillfully and beautifully. He is a great illustrator and storyteller, and makes Deep Dive Daredevils better than the sum of its parts.

Do you think that Deep Dive Daredevils will ever be available as a print comic?

Absolutely. It's just a matter of the right time and the right format. As soon as Secret of the Beaufort Sea (the first story arc) is finished we'll begin seriously looking into options for a print edition. Whether we go through a traditional publisher or something like Kickstarter is all up in the air at the moment. Time will tell.

Was there any consideration of putting ads on Deep Dive Daredevils?

Yes, and eventually you will probably see some ads on the page. However, one of the things we are most proud of is that the site's design really serves and enhances the visual aesthetic of the comic. So, before we introduce advertising we'll probably have to do a re-design of the site, and figure out how to integrate the advertising without sacrificing the feeling that you are sitting at a musty, old desk reading a comic from the Golden Age/pulp era.

I imagine it’s a lot like a television show’s writer’s room. Either in person or through IM we spitball ideas, hammer out plots, and discuss themes until we’ve broken a story. After that, Evin will usually go off and write a bible/synopsis. Once he’s finished it will go through the grinder again, and then I will take it and script a first draft. From there, we have another revising session, usually over-seen by Dan, and then if we’re lucky we have a script ready for Danilo.

Sometimes it’s frustrating. Sometimes it’s maddening. But, when the script is finally finished it’s always better than what anyone of us could have produced on our own.

Deep Dive Daredevils has been running at an impressive rate of a page per week since April...how long do you plan on continuing this comic?  Do you have an endpoint in mind for the series, or is this something that could continue indefinitely?

We've kicked around some ideas for an ending to the adventures of the Custer and it's crew. However, before we ever get to that point we have A LOT of Deep Dive Daredevils stories to tell. At this point, we have a good three to four years worth of stories roughly plotted, with more ideas popping up all the time. Starting in 2013, we begin the slow build-up to an EPIC story that will rock the Daredevils to their core - especially the Captain and Doc!

So, all the Daredevilers out there can rest assured, there's a lot more of our signature nautical adventure coming their way.

Are there are other current or upcoming ThreeOneFive projects that you'd like to talk about?

At the moment, we are really concentrating on Deep Dive Daredevils, but we are always shepherding other ideas through various stages of development. So, stay tuned!

Also, our print debut, Baby Girl, just finished it’s run as a back up in Joe Keatinge’s Hell Yeah, issues 3-5. So, if you like naughty adventure (i.e. for mature readers), dig through the back issue bins and check it out!
Posted by Seth Jacob at 12:02 PM